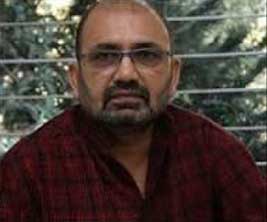 Vinay Shukla has been an active scriptwriter and director of Hindi films over the last three decades. His films have had the distinction of not only succeeding at the box office but also garnering critical acclaim and prestigious awards. His most well known film, Godmother – clearly established him as a craftsman capable of combining the nuances of good cinema within the popular narrative form.

His association with performance arts began at the age of nine when he began participating in radio plays at Akashwani, Jaipur. Thereafter, his creative urges led him into theater at the college and university levels. It was only expected that these experiences would eventually draw him towards the most powerful medium of our times- cinema. So, he joined the Film and Television Institute at Pune. The high quality training and exposure to the best in world cinema at the institute set the ground for a deep and lifelong interest in not just film-making in general, but more particularly the unique and vibrant narrative form that is at the center of popular Indian films. He passed out with a Gold Medal and immediately plunged into the first step of filmmaking – scriptwriting.
Twenty-five odd films followed in regular succession. Vinay Shukla kept experimenting with different styles of story conception, screenplay formats and dialog construction in regular mainstream fare (Satyamev Jayate, Ram Jaane, Virasat…) as well as off-the-beaten-track subjects (Parinay, Tarang…) achieving success and/or acclaim along the way as well as popular awards.

Simultaneously, his interest in traditional performing arts and their narrative peculiarities continued to enrich his own understanding of the elements that the Indian film narrative form had borrowed from each. He was increasingly convinced that an awareness of popular Indian cinema among Bollywood’s writers and directors could lead to much more imaginative, engaging and entertaining forms that could also allow serious issues and themes to be tackled in the screenplay.

This conviction led to the most definitive example of this form in Vinay Shukla’s career until now – Godmother. The film had critics raving for a long time. It also received six National Awards, including for Best Feature Film in Hindi and Best Actress and a Film fare Award.