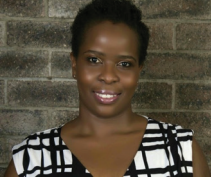 Mmabatho Kau has an extensive understanding of media management, having worked as a producer, broadcaster,  development executive and script consultant. She has a Bachelor’s degree in Journalism and Media Studies (Rhodes University) as well as a Master of Science degree in Media Management from Stirling University, Scotland.

She has produced a variety of shows in public service as well  as commercial pay TV for various broadcasters in South Africa and has worked as a script consultant on films such as My Zulu Wedding, Whale Caller , Kalushi; the Solomon Mahlangu Story and Beyond The River.

Her varied experiences are testament to her passion for re-telling Africa’s story and finding ways to contribute towards building a sustainable film and television industry. Her work as producer includes Soul City 12 (a 26-part educational drama series which aired on one of South Africa’s most watched national channels). She is currently developing a 13-part series for the SABC which is due to air in 2020.

She is co-mentor in Kwa‐Zulu Natal Film Commission’s industry training programme FITI. Through FITI she has  helped film school graduates develop scripts which they will  produce and shoot as part of the Commission’s commitment to developing KZN’s film industry. She has also worked with South Africa’s National Film and Video Foundation (NFVF) as a mentor on their screenwriting programme SPARK.

In 2017, she joined Urucu films as a co-story consultant on their writing residency programme (REALNESS), where she helped develop over ten feature film projects from writers  across the continent.

In 2018, she was selected to participate as a script editor in the Torino Script Lab where she had the opportunity to consult on scripts from five European countries. Her work as a consultant recently took her to the Philippines as part of the First Cut Lab and Film Development Council of the Philippines joint inaugural writing  residency.

Her passion is to not only help African writers tap into their inherent gift to tell moving stories, but to make sure those  stories reverberate around the world.