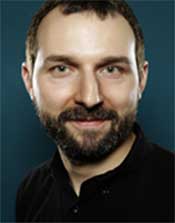 Lukasz Konopa graduated from the National Film and Television School in the UK (MA Documentary Direction). Before that, he attended the Katowice Film and Television School in Poland. His films have played at numerous festivals around the world, such as, Hot Docs, Clermont-Ferrand, Camerimage, SXSW, and most recently, the Chicago International. In 2013, his short AFTER was awarded Best Documentary by CILECT, the association of the world’s major film and television schools; in 2014 he was selected as a Berlinale Talent.

He’s made short films for the Guardian, TVP1 (Polish Television), and BREAKING THE NEWS at the Berlin Art Biennale. He also worked as an edit director on Russian filmmaker Ilya Khrzhanovsky’s already legendary (and still uncompleted) second feature DAU. He is currently developing his first feature-length documentary and working as a freelance cinematographer in London.