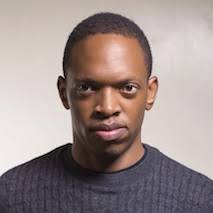 Jim Chuchu is a Kenyan visual artist, filmmaker and singer songwriter living and working in Nairobi. He is also the co-founder of the NEST Collective: a multidisciplinary art collaborative based in Nairobi.

After many years of working as a photographer and music video artist, Jim’s first short film—fantasy short Homecoming—was one of six short films presented as part of the African Metropolis project: a compilation of six short fiction films, set in six major African cities. The film has been screened in various festivals including the 2013 editions of the Toronto and Durban and Rotterdam International Film Festivals.

Jim’s first feature film, Stories of Our Lives was an anthology film based on the lives of queer Kenyans created in collaboration with  the NEST Collective. The film had its world premiere at the 2014 Toronto  International Film Festival and went on to garner the Jury Prize at the Berlin  International Film Festival of 2015. The film has screened in more than 60 festivals  worldwide and continues to screen in various cities.

He also directed three other short films ‘To Catch A Dream’, ‘Dinka Translation’  and ‘Urban Hunter’.

Jim is currently working on a series project.