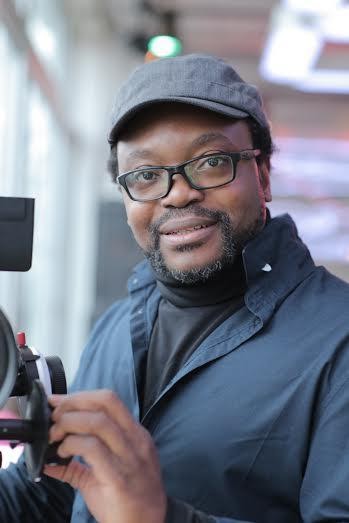 Jean-Pierre Bekolo is a noted African film director from Cameroon. He already garnered attention at the Cannes Film Festival with his debut film Quartier Mozart (1992), with a style that is playful, comic, and sardonic became the representative of a new generation that has been working against the restrictive expectations of African cinema, mixing genres and linking pop with politics.

He directed Aristotle’s Plot (1996), the African entry in the British Film Institute’s series of films commemorating the centenary of cinema that has included the participation of artists such as Scorsese, Bertolucci, Frears, Miller, Reitz, and Godard. Part action movie send-up, part parody of Aristotle’s rules, part satire on Africa’s preoccupation with itself, this first African film selected at Sundance shows Bekolo to be an “increasingly fearless trickster.

”His avant-garde political thriller Les Saignantes (2005) that premiered at the Toronto film festival was nominated in two categories at the French Césars in 2009 and is now considered to be the first African sci-fi movie. It won the Silver Stallion and Best Actress Awards at Fespaco (Pan African Film and Television Festival in Ouagadougou, Burkina Faso) in 2007.

Bekolo has also created in 2008, a video installation called An African Woman in Space that was on display at the Musée du Quai Branly in Paris, as part of the Diaspora exhibition curated by Claire Denis. Banned in Cameroon in 2013, Jean-Pierre Bekolo’s controversial film Le President questions the phenomenon of Africa’s “perpetual governments.”

His new film, a 4 hour documentary Les Choses et Les Mots de Mudimbe is part of the official selection of the 2015 Berlinale. “An unusual film, as fascinating as its object/subject, opulent, sensitive, clever, and radical. Another station of delightful postcolonial, cosmopolitan filmmaking”.

Alongside his work as a film director, Bekolo is an activist, he writes and publishes, in addition to teaching at the University of North Carolina, Chapel Hill, and at Duke University. Recently he has been dividing his time between the USA, France, and Cameroon, and starting in the summer of 2015 he will be a fellow of the Artists Program at the German Academic Exchange Service (DAAD) in Berlin.