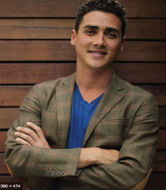 Elias Ribeiro is currently producing Southern African Films, he has worked in the media industry internationally since 2005. Along the way he has become fluent in English, Spanish, German and Portuguese, he also learnt some French and a little bit of Zulu.

He moved to Johannesburg in 2010 for his MA in Film Producing and founded his production company, Urucu  Media in 2011. Urucu’s focus is on author driven feature length fiction cinema, but it also develops high concept TV  series and documentaries.

Elias loves how story telling, filmmaking allows one to revisit, reinvent life and look at it from different perspectives with  distance. He enjoys discovering and nurturing emerging talent to a point where an artist is able to produce their best work. He has produced content for broadcast, theatrical, educational, airlines, VOD and has shot in over 15 countries.

In 2016, Elias launched REALNESS- which is now in its 4th iteration-, a Pan-African Screenwriter’s Residency, 5 screen writers are be invited to attend a six-week residency to develop their original feature screenplays. The aim of REALNESS is to provide the continent’s best emerging writing  talents with the necessary time, space and support to develop their unique cinematic vision.

In 2017, Elias produced, The Wound (South Africa) and  coproduced The Train of Salt and Sugar (Mozambique). Both were selected as their country’s official submission for the ‘Best Foreign Language Film’ category for the 90th Academy Awards in 2018. The Wound made it to the short list of 9 out of 92 entries that year and won 6 SAFTAS and 28 International awards.

In 2018, he helmed the Market component of the Cape Town International Film Market and Festival. He successfully  designed and executed a programme to bring both African  and International film industry players meet and network.

In 2019 Elias developed and launched Creative Producer Indaba, a training programme for African producers that will  foster international cooperation between Africa, Europe and  North America. It is a partnership between Realness, EAVE, IFFR and Sundance Institute. Elias has been acting as a  consultant and mentor is multiple labs and projects across  Africa.