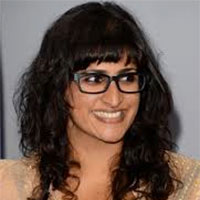 Ami Boghani is an independent screenwriter and producer based in New York City. She has been involved with Maisha since its inception in 2004. Alongside Mira Nair and Musarait Kashmiri, Ami developed and executed the Maisha training programs from 2004 – 2008. Now, she is a member of the Maisha Foundation’s Board of Directors and served as a screenwriting and production mentor at the 2010 Filmmakers’ Lab in Kampala, Uganda.

Ami worked in development and production at Mirabai Films, Mira Nair’s production company, from 2004-2012. Most recently, she co-wrote the screen story and co-produced Nair’s latest film, The Reluctant Fundamentalist, starring Riz Ahmed, Kate Hudson, Liev Schreiber, and Kiefer Sutherland (2013). She lives in Brooklyn with her husband.