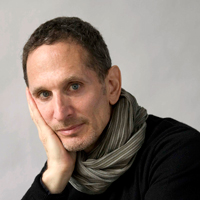 Alan Brown is the recipient of numerous writing and directing awards including National Endowment for the Art and New York foundation for the Art grants, and a Fulbright Fellowship in Journalism.

His first feature ‘Book of Love’ (Sundance Home Entertainment) was nominated for the Dramatic competition Grant Jury prize at the 2004 Sundance Film Festival. Alan’s novel ‘Audrey Hepburn’s Neck (Washington Square Press) ’ has been translated in to eight languages, and won the Pacific Rim book Prize, and is currently being developed for the screen.

Alan’s also is also a contributing editor at travel & Leisure Magazine, and his travel writing has be widely anthologized. A regular contributor to Gourmet and Bon Appetit, He has been nominated for a James Beard Award for his food writing. Alan live in New York City.