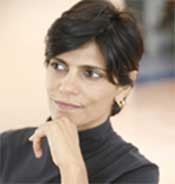 Meena Nanji is an award-winning filmmaker who has produced, written and directed independent documentaries and experimental videos. Her first feature documentary, View From A Grain of Sand (2006), about the last 30 years of women’s rights in Afghanistan, won several awards at international film festivals and was broadcast on television internationally. Meena is a recipient of several prestigious grants, including the Rockefeller Foundation Media Arts Fellowship, National Endowment of the Arts, Center for Asian American Media, the Paul Robeson Fund, Pacific Pioneer Fund, Women in Film Foundation and Durfee Foundation. She was a Film Independent/Project Involve Fellow 2012-13 and a Rockefeller Bellagio Foundation Fellow 2014.

Meena has programmed film/video festivals including the Los Angeles Festival and Outfest. She has been a juror on grant-giving organizations including the Rockefeller Foundation Media Grant, Center for Asian American Media, Durfee Foundation, AFI Film Grant, and for film festivals. She has also taught at University of California, Santa Barbara and Otis Parsons School of Art and Design, Los Angeles. She has been invited to guest lecture at universities and conferences around the world. She was a founding member of ArtWallah, L.A’s South Asian Arts Festival and most recently, in 2008, a co-founder of GlobalGirl Media (GGM), (www.globalgirlmedia.org) a non-profit media training organization for teenage girls in underrepresented communities of the world. Currently GGM has programs in South Africa, Morocco, Los Angeles and Chicago.