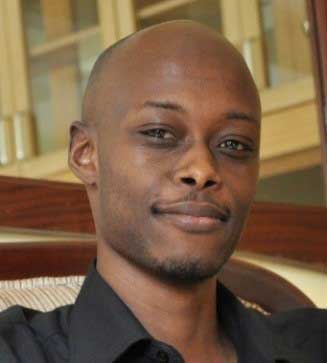 Samuel has been a practising artist since 2003 and has gained experience in various art forms namely; dance, theatre, film to mention a few. His primary passion is dance and his interactions with various dance artists and educators have given him the ability to collaborate on various projects and also learn a great deal about dance as an emerging art. He is a founding member and Artistic Director of Guerrilla Dance Company, presenting dance creations in Uganda, Kenya and Rwanda.

He is not only restricted to the field of dance, but is also a practising screenwriter and delves into theatre from time to time. His work in theatre has taken the form of amateur and professional productions as an actor and he continues to seek out new possibilities in the fields of theatre and film. The Marriage Chronicles is Samuel’s first play written for the stage. He hopes to develop this work further into a full stage production that can tour the East African region and internationally.

The future continues to show a lot of promise for an individual whose sole desire is to make art accessible to as many Africans as possible. An artist at heart, his ultimate plan is to set up a Centre of Excellence for the performing arts that will empower Ugandans to explore their cultural identity and open up possibilities for creating innovative cultural practices.

He is the Artistic Director of Guerrilla Arts, an arts management organisation that deals in production, documentation, training, and administration of artistic and creative projects. He has worked with various organisations and projects as an accountant, manager, project coordinator, and production assistant. His strength is in the area of administration of creative projects having worked with Danceweek Uganda and Dance Transmissions festivals. His work has taken him to various countries namely; Rwanda, Kenya, Tanzania, France and Senegal where he has performed, taught workshops and moderated conferences. Samuel is capable of fitting into any work environment and his dedication to the arts and their development in the country enables him to inject himself into any role that he is given.