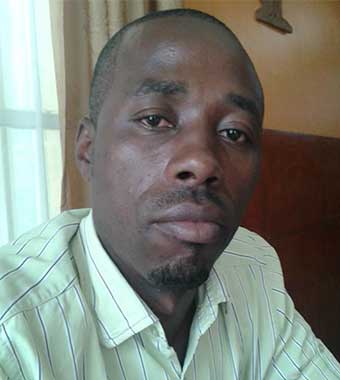 Roger Niyoyita was born in 1976 in the northern part of Rwanda and was the first born in a family of six children. From his young age he had a passion for cinema since at that the time, he was working in his father’s movie theatre by the age of 13.

Cinema always seemed to be part of his destiny because along all his studies, he found himself in the creative fileld. In secondary school he did Art and Human Sciences, which demanded a lot of reading.

At the National University of Rwanda he was in the faculty of Media, Art and Human Sciences where they had the option of Creation and artistic critics. That’s where he decided that cinema would be in the heart of all his activities. In 2005 after University he joined Rwanda Cinema Center where he acquired knowledge in filmmaking. Later on, he was able to work on various local productions as a director, scriptwriter, production manager, casting director, etc. He was also involved in the production of many documentaries. In 2013 he made a big step when with the support of Maisha he participated in the first filmmaker and techinical Lab in Rwanda Kigali. At the same lab he was able to produce his first film Mutoni.

He is currently a Film journalist working as a movie journalist at Contact FM and at filmzacu.com. He also works for Inyarwanda Ltd. He is working on a script of a film called Uwera by Uwizeye Annete whose film is to be produced very soon. One of he’s upcoming projects is a feature film The Muddy Road whose script he has completed and is still looking for funds. He’s question is, “How can you help us get the short films we produced get into various festivals especially the ones in the region?