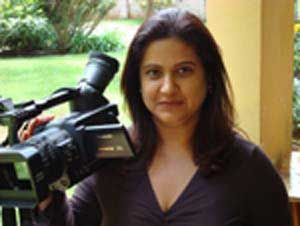 Ravneet Sippy Chadha is a Kenyan Writer-Director, based in Nairobi. She quit financial services in 2007, as she had a powerful urge to tell her own stories through film. As a child she had to conform to a rigid set of rules . She rebelled against rules that denied her self expression. Now the whole world must see her POV through the explosive medium of film .Film is her calling and passion.

She has written and directed 4 short films. Her latest short SUBIRA, based on her personal experiences of a Muslim girl’s struggle for freedom from conformity, won 15 international awards including Best short film at Amakula film fest , KIFF, ZIFF, Rwanda in 2008. It won 2 Awards in France’s Amien film fest, and 2 awards Taarifa film festival in Spain.

Subira was the first Kenyan film to be screened at Cannes film fest. It got distribution on TV channels in France, Spain, Belgium , Italy and PBS, Usa, Mnet Africa and KTN-Kenya in 2009.

Based on this highly successful short SUBIRA, Ravneet is currently writing her debutant feature “Through the veil”, also based on a Muslim girl’s struggle for freedom. She intends to raise finance in 2014 and shoot in 2015. There is a producer attached.