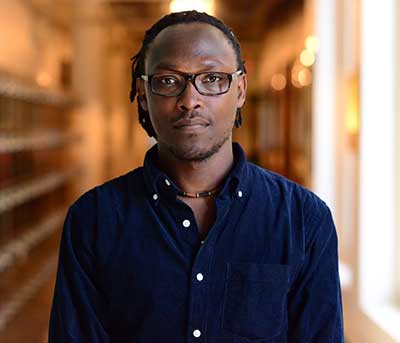 Peter Tukei Muhumuza is an East African director and cinematographer currently based in New York City. Coming from a background in industrial and fine art he entered the film industry with a keen visual eye and often integrates multi media such as stop-motion animation, puppetry and photography into his work. Known for his imaginative short films “Ink”, “Kengere”, “Reflection” and “Walk with Me”, he has shown at the TATE Modern, The Mehrangarh Museum of Art and State of Design Conference with Olafur Eliasson as well as prominent festivals such as the International Film Festival Rotterdam, CPH:DOX and the International Short Film Festival Oberhausen. He is the recipient of Oberhausen’s International Award for Human Rights, and was nominated for the Tiger shorts Award at Rotterdam. He is passionate about telling untold African stories in their indigenous languages. He is currently a 2019 MFA candidate in Film and Television at Tisch School of the Arts at NYU.