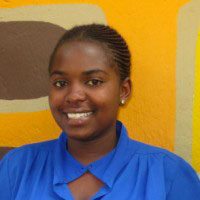 Patience Katushabe Asaba was born in Ugandan and has loved films since her childhood.
Her great break through was when she started making films in 2011, at the age of 17, with the Maisha Youth program -Youth And Films.
She was trained to make films and was the editor of a short film called “Mandu.”

In 2012, she directed a short film called “Never Lose Hope,” which was also under the Maisha youth program.
Then in 2013, she worked as sound assistant on a trailer for “DOADOA” and as an assistant producer on a TV episode for Raising Voices.

She has recently worked on a short documentary directed by Mira Nair “A Fork, a Spoon and A KNIGHT” as a production assistant.
She’s currently an office administrator at Maisha Film Lab.