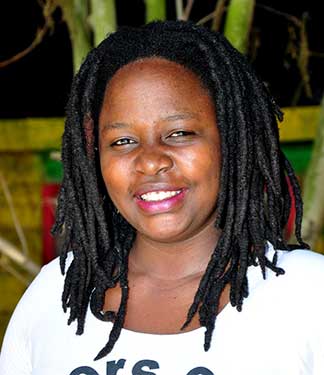 Ndimbira Claudine(Shenge) is a young Rwandan female filmmaker who resides in Kigali, born on the 4th April 1990. She started to write stories at the age of 15, it is the reason why she decided to join short courses in digital film making at Kwetu film Institute after her secondary studies in 2012.

In March 2013, she went in Luxor International Film Festival in the animation workshop. In July 2013 she wrote and directed her first short film called “My mother-My hero” in a workshop called Girls make movies during Rwanda film Festival.

In 2014, since March till end of August, she worked as a coordinator for a short film project called “Shed light on your rights” where she produced 2 fiction films(Impuruza and She) and directed one called “SHE”. Her latest project called Hora Mama was produced in partnership with Kwetu Film Institute and EFB. Apart from being a film director and a script writer she is also a script supervisor.