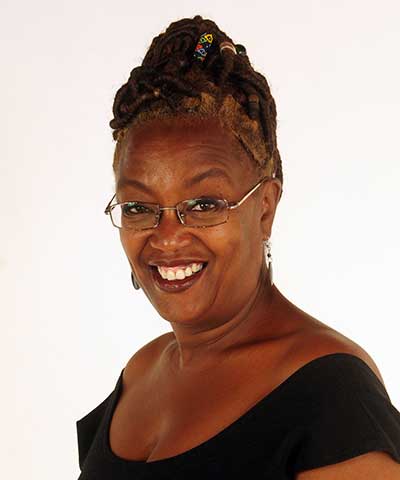 MŨMBI KAIGWA is an actor, writer, producer and director of theatre, film and TV. Starting in primary school (verse speaking, musicals, and plays) she also appeared in a television production of Wole Soyinka’s “The Strong Breed” at 10 years old.

Between 1998 to 1999, Mũmbi worked for the United Nations in Nairobi. Since 2000 she’s devoted her life to the arts, working all over East Africa and using her original blend of performance art to address social themes, such as conflict and violence, health and drugs, history and culture, as well as conducting community-driven peacebuilding workshops throughout Kenya and in Tanzania.

Mũmbi is an associate member of the League of Professional Theatre Women (New York), and sits on the board of advisors of Mira Nair’s Maisha Film Lab in Uganda. She is also a Sundance Theatre Lab (Utah, USA) alumna.

In 2014 she received a number of awards from CEO (South Africa) Magazine, including a Lifetime Achievement Award for her contribution to Arts and Culture on the African continent. In 2016, she was one of six recipients of the Thoth Award from the Ministry of Culture, Cairo, Egypt.

Her plays include They Call Me Wanjikũ (about the importance of names); Hot & Safe; Cold & Dangerous (about positive living with HIV/AIDS); KigeziNdoto: A Hook for Dreams (about Africa’s historical legacy); and The Voice of a Dream (about the importance of following our dreams). These works have been seen in Africa, Europe, Australia, Canada, and the USA. Her most recent play, Orchid was written in 2016, on commission by the Royal Exchange Theatre, Manchester, UK, and deals with the medical issue of fistula. Orchid will be performed in Eldoret, Kenya in 2017 and in Santiago, Chile in October 2018.

Her films (in progress) include Day In The Life documentaries about a Nairobi-based flower-seller, and US-based fashion artist I’dia Dega’s collaborative work with Maasai artisans in Olorgesailie in Kenya.
With a long acting career, Mũmbi began producing and directing in the late 1990s. In addition, she’s appeared in films and television productions, such as Asha, The Knife Grinder’s Tale, The Constant Gardener, The First Grader, Neighbours, and more recently, the Kenyan political thriller, The System.
To see photos of her work and for more information, visit mumbikaigwa.com.