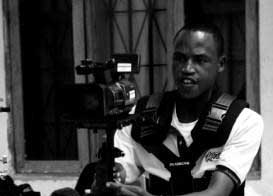 My name is Jamir Musenze Jamal. I am a filmmaker. I started the journey of filmmaking in 2004 after spending a period of time while practicing creative writing and photo journalism as a freelancer.   I have been in the filmmaking world while undertaking personal projects in my film Art Studio as well as getting involved in other independent filmmakers’ productions- working on sets for feature films as Director, production designer, and Art Director.   My career achievement is demonstrated while working on various film sets and by attending local and international filmmakers’ workshops.   Recently, I have been able to manage and carry out a number of workshops in the various communities helping young people in giving them basic skills about camera acting by using the few available resources to achieve their dreams.   Currently I have just completed my diploma course in Filmmaking majoring in directing and Screenplay writing; where I will be graduating as a director in both fiction and documentary filmmaking,