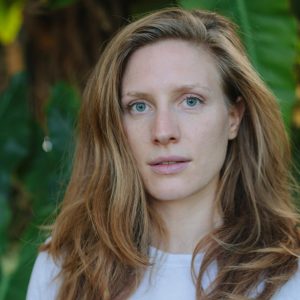 Born 1988 in Göttingen, she grew up both in São Paulo and Bonn. She has a Bachelor and Master studies of comparative literatures at the University of Vienna, the Université Aix-Marseille  and the Universidade Federal do Rio de Janeiro.

From 2014 till 2018 she studied scriptwriting at the German Film and Television Academy in Berlin. At school she directed a teaser for her thriller series project GREED (working title). Writing for the sci-fi comedy web series ALIENIZE she experienced the writer’s room.

In 2017 she won a script-competition of the German broadcaster 3sat with the film drama PENTHESILEA which was shown at the International Festival of Hof. Her comedy feature project PANIC IN PARADISE was selected for the masterclass of FFKB 2018, led by Sebastian Andrae. Currently, she is working for a TV series created by  Miriam Henseling and Esther Schwei