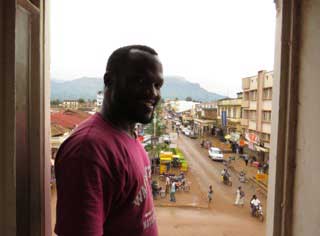 Bwayo Moses is a film student doing his final year at Kampala Film School. He directed his first documentary last November about stigma towards albinos, which is currently in post-production stage.

He is an established sound recordist who has worked on several sets around Uganda including: “My Karamoja” (2012) a recent documentary directed by Zaeh Wisanj, “Somebody Clap For Me” (2012) directed by Luciana Farah, “Minds of the Sabiny” (2012) co-directed by Bwayo Moses and Ibrahim Rahim for an NGO that is fighting against FGM in the Pokot region along the Uganda-Kenya border.

He is currently writing his graduation film “Ripe Mangoes” about under age prostitutes in Gulu northern Uganda. He is also a freelance photographer fascinated by colors; Bwayo Moses spends most of his free time with a camera capturing moments and faces. He currently lives in Kampala near Gabba and spends most of his evenings on the shores of Lake Victoria watching fishing birds and fishermen on canoes. Moses is an enthusiastic filmgeek who discusses world cinema with friends whenever he gets a chance.