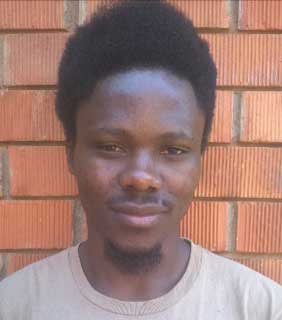 My name is Arnold Aganze, I am an aspiring filmmaker originally from Eastern Congo, but due to circumstances of war, I have been residing in Uganda for the past two years.

My life has been somewhat of a rollercoaster until today, and that has lead me to feel that I have stories to tell, and experiences to share, and maybe along the way do something positive for this world. I started off writing about my life, but not having had any secondary education, words started missing, probably that would be the case for many people that speak six languages. Words are not my medium I thought, I have to speak my own language, and that is how I decided that moving images would be my way and my medium. Along the way I met Derek and Lena, two filmmakers, writers and journalists that took me along on their film projects in Uganda. I started off volunteering to carry the tripod and doing translations, like a fly on the wall, I kept checking for any learning opportunity, learning not by doing but by observing everything with great intent.

My duties went from all kind of logistics, carrying equipment to setting up tripods and light kits, operating the microphone and sometimes assisting as a second camera. We did a film on an herbal doctor, as well as one on mother tongue literacy, as well as short films aimed at raising funds for nonprofit projects, always meeting great characters along the way. Since then I have started to write a feature film together with them and we are now searching for an experienced producer to bring the project into the next phase. In the meantime, I am hungry for any experience I can get, and after following the Cinderella story of Joel Karakezi, watched his interviews and understood how beneficial Maisha film has been for him, I am really eager to take part in the doclab and soak in the knowledge and counsel of great documentary filmmakers.

At this point my interest is in all fields. Like the owner of a company should know what it’s like to clean the floor after all workers are gone as much as he should know about finance and marketing, I really believe that every aspects of film must be understood at least partially in order to be a good director. For now I really need skills in writing and learning to translate my ideas visually with great taste. I have witnessed how great editors can save a film with terrible footage, and how much a cameraman can have an imprint on a film, and so these are also crafts that I want to learn to master. I understand that in African films sound is often greatly underestimated, and so I really want to get serious knowledge about sound production for film.

My favourite part of this 15 day journey is that it is residential and that total immersion is really what I look forward to. To talk, think, act film all the time, with fellow East African young directors and writers like myself, as well as masters in the field, to have an open door to advice at all times, that sounds extremely exciting! I love the hands on approach, to work with professional equipment to bring an idea to life on the screen, from inception to completion, that is a chance of a lifetime. I feel like for the first time I will be pushed to make something that I can be proud of, I can be free and creative, and always have someone to share an idea with, while also getting chances to make other’s projects better. What else could anyone ask for? (Maybe a deal to make a feature film at the end of the workshop)

Living in Kampala I see stories unfolding before my eyes all the time, in the end everyone is a story in themselves, our thoughts, our feelings, our life and our perception of it, they all carry a tale to be told. I have chosen a subject for my documentary that takes into account the format and restrictions of the doclab, choosing a universal story that can be told in a million ways, but through a portrait that carries a very unique side specific to Uganda. Since the beginning of time cultures have defined what makes a good husband and a good wife, and in Uganda that idea is being transmitted from woman to woman, in the old way of oral transmission that carries all the depth of a culture, sharing secrets that are too good to be written. More than simply revealing some of these secrets, the film will try to get an honest glimpse at one of the most ancient oral trasmissions, and a modern look at the role of women and men in Uganda. We will know what makes the perfect woman/wife.

Hopefully this doclab will serve as a great boost to my career and help me bring more of my projects to completition. If my documentary on Senga is made, then I aim to present it as a teaser for a longer documentary on the same topic. , and give me more skills to incorporate into my feature project. I know the hardest part of the exercise will be the short length and number of days, but I’m ready for the challenge.